It is a very rare thing indeed that I can recall detailed information at all, but I can definitely recall when Katy and I first talked about Sideliners. Katy and I like to put together bit-shows at the Hoopla Improv Marathon that happens every year. Katy just got in touch with me one time and just said, “let’s put on a stupid show’. What followed was a soon-to-be three-year tradition of shows where we try to do improvise a scene and slam a custard pie in one another’s face.
I was also playing a Texan in a play elsewhere in London during the lead-up to this first Pie-day Night show, so I was cracking jokes about Matthew McConaughey and his history of romantic comedies over Messenger. Katy asked “What’s your type in a Rom Com?” The phrasing seemed weird to me and, frankly, I had no idea what she was talking about. I responded “something between 500 Days of Summer and Shaun of the Dead”. I’m a big film nerd and I thought she was asking me which ones I liked stylistically. You know… to watch.
She kindly corrected me. She was talking about character types, which in retrospect makes perfect sense and this is a classic example of Fargher-brand awkwardness that my friends know me well for. I guess I just never presumed that I would even factor in to the casting of a romantic comedy. But I said that I was definitely the best friend. This has been my casting type for pretty much every role I have ever gotten as an actor. Even in the junior play at school, I remember cracking jokes about it with my actual best-friend Culum, who was playing the lead and to whom I was also playing the best friend on stage. It’s ridiculous. I was 14 and I was already type-casting myself. Remember that awkwardness I was telling you about? That goes back a way. 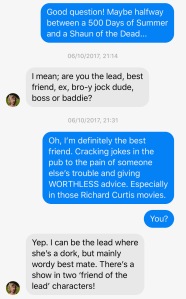 Anyway. Katy responded in like, saying that she was either a quirky lead or a best friend. And then the discussion began. “There’s definitely a show in two ‘friend of the lead’ characters.” We riffed on it, then got back to the business at hand, which resulted in me being publicly pie-ed in face late at night on the Hoopla Impro stage. That was in 2017. And we didn’t talk about this idea for the rest of that year.
Now, what I did not tell Katy, or anyone in fact, is that this idea hung around in my mind for months and months. It bothered me. It plagued my creative mind. It was a great idea and it was definitely something I wanted to pursue but I was timid about doing because I was busy, Katy was busy… And when a good idea sinks its claws in to my imagination, it can completely ruin my creative process. I have several scripts written that will never see the light of day (but I wrote) because they were good ideas that were clogging up my mind to the extent that I couldn’t work on anything else until I wrote at least a version of them somewhere! But the concept felt very much like Katy’s and we hadn’t worked together that much at that point, and it felt like something I had to work on with Katy, or not at all. 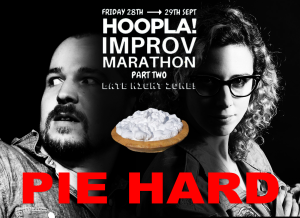 Spin forward a year or so and Katy and I work together on plays, improv, hip hop shows (believe it or not) and we performed our second pie show, Pie Hard, in which I also ended up getting a pie in the face (Katy is 2-0 on pie shows, but I shall have my revenge). The next day, we also perform an improvised Rom Com and then at the Stroud Theatre Festival, I finally get round to watching Katy’s one-woman show, Schutte The Unromantic. It’s awesome and I found myself thinking there is definitely material in there for a different type of romantic comedy. Now, we have not really talked about our Rom Com idea, but it was still bothering me. STILL! AFTER A YEAR! But I don’t say anything because Katy is an insanely busy person… and basically because Katy wrote the first pages and stuck them on a Google Doc for me to look at! 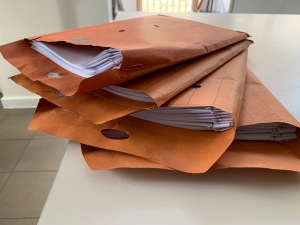 What followed was an amazing ping pong session of us both writing pages, editing each other’s pages and giving each other equal license to do so to the point that I genuinely can no longer tell who first wrote which pages or whose ideas they were and what edits we made for each other. It was an excellent experience. Then we started meeting for read throughs. Then we started inviting some trusted allies to some read throughs. And now we’ve got one coming up for a 94 page script that is some of my favourite writing I have ever done. Not just the script. The process of writing it has been sublime.

Now we get to make the thing! But we are going to need a little help…

And as for the pie shows, when the next Hoopla Improv Marathon happens… I will get my pieback… payback.. with pie… We may need a lot of help… 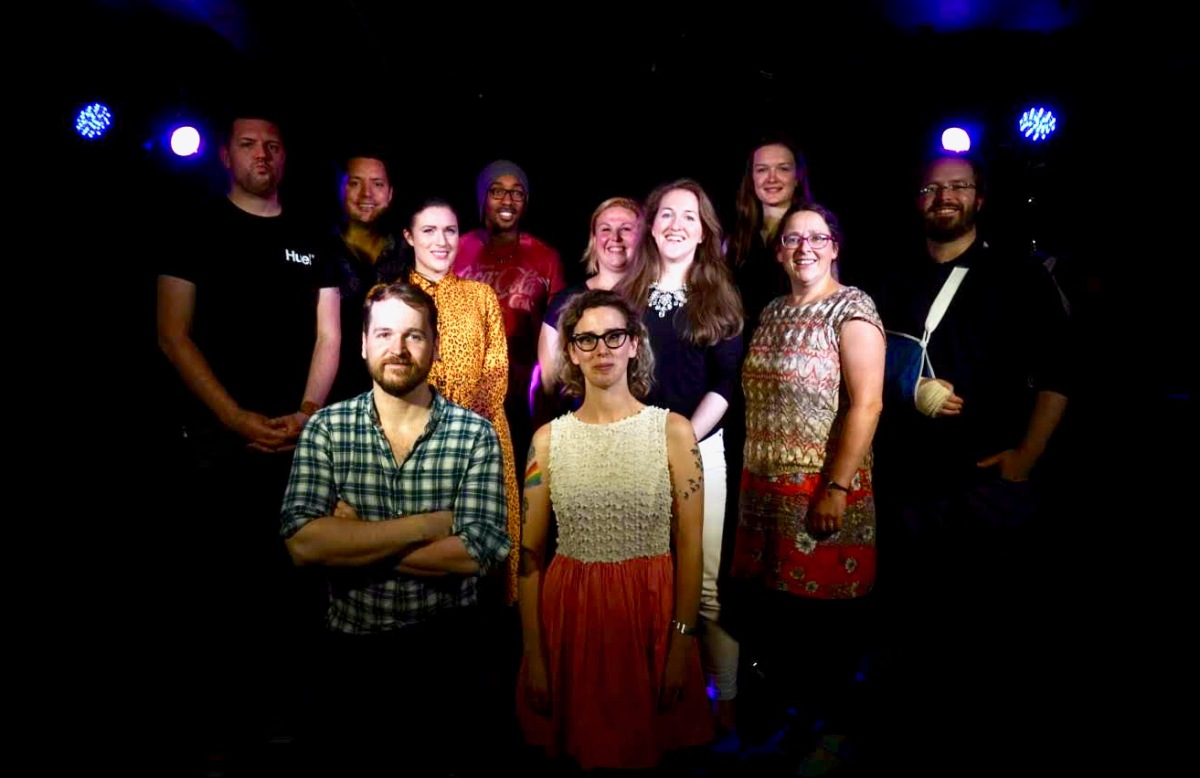