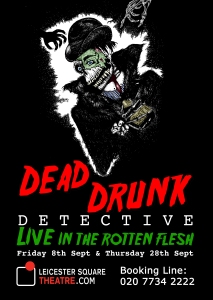 Dead Drunk Detective is a seven part comedy-noir podcast serial starring the most unlikely of private detectives. How unlikely? He’s a drunk zombie, and his name is Johnny Stumbles. And with his sarcastic secretary Betty, he’ll have to deal with Dracula, The Bogeyman, and The Devil to get to the bottom of the case… and the bottle.

Dead Drunk Detective is a project that is just completing its second series with Podcast Adventures and it was one that Ed had the pleasure to be an intricate part of. Written by Brendan Way, the show takes place in a gothic borough of an unnamed city populated by ghasts and ghouls, and where an inebriated zombie is tasked with solving all of the crimes. Ed took part on the project as a Producer and Script Editor, workshopping the material with Brendan and then producing the live events in which the show would be recorded, including two nights at the Leicester Square Theatre.