Ed is a regular performer on the comedy circuit, but sometimes  he also appears on stage as an actor, too.

As Christian in Let’s Summon Demons 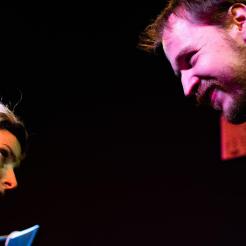 Ed has also been collaborating with the latest solo show from comedian and actress Katy Schutte titled Let’s Summon Demons.  You can catch the show at The VAULT Festival in London from 13th-17th March 2019 and at the Brighton Fringe Festival on the 3rd, 4th, 17th and 18th May 2019.

As Oswald in King Arthur – The British Worthy

As Oswald in King Arthur – The British Worthy

Ed joined the cast of King Arthur. Adapted from the 17th Century opera and relocated to the trenches of the First World War, Ed played Oswald, King of the “Saxons” and nemesis of King Arthur. He also popped on stage as Conon, Duke of Cornwall and father to Arthur’s bride to be, Emmeline.

Ed joined the cast of Care Not, Fear Naught, a new play from Temporarily Misplaced Productions that will be portraying the life of notorious female pirate Anne Bonny. Ed played the role of her hapless first husband, James Bonny. The show will enjoyed a two-week run at the Edinburgh Fringe Festival 2018  and received 4-star reviews from FringeGuru and Broadway Baby.

Ed recently played the role of Graham in Stonecroft, a new play from Daggers Productions that completed a sold-out run at the New Wimbledon Theatre Studio.

As Graham in Stonecroft

Stonecroft combines a sense of the supernatural, the uncanny and the crime thriller. During one act, the play explores the status of a couple’s relationship, their dependancy on modern technology and bourgeoisie comforts. When these are removed and the pair are threatened with new elements beyond their control, we see an unsettling change and their reaction creates further drama and suspense.

The play takes place over the course of one evening. Some travellers find themselves stuck in a remote cottage and as the evening unfolds, their relationship begins to breakdown as strange events occur and the true nature of the building’s past is revealed.

William Shakespeare’s Land of the Dead by John Heimbuch

What’s better than Shakespeare? Shakespeare fighting zombies. And Ed got to play the man himself in a play best summarised as “Shaun of the Dead meets Shakespeare in Love”. A play that balances a loving tribute of Shakespeare’s life and a romp against the undead horde. Once more unto the breach, dear friends!

Ed played Malcolm in the Bedroom Farce, Alan Ayckbourn’s classic comedy of four marriages in three bedrooms falling apart one by one after an ill-fated dinner party. Playing Malcolm, Ed got to break up fisticuffs, row with his wife and build rubbish furniture. 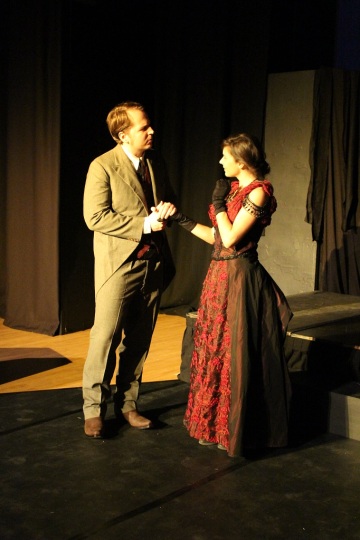 John Heimbuch’s stage adaptation Drakul stays faithful to the original novel but brings Mina into the centre of the action.

Under the electric lights of Victorian London, she is enamoured of a handsome young solicitor. But when Jonathan disappears on a business trip, her friend mysteriously falls ill, and Mina is approached by an alluring foreign prince, a shadow falls over their lives.

Ed had the pleasure of playing Quincey Morris, a small but important roll with a Texan accent, cowboy boots, and a small arsenal of weaponry. He’s in the original novel, believe it or not.